DRIVEN: It’s the fun factor that makes the Suzuki Swift Sport stands out

When talking performance, the Suzuki name might not even form part of the conversation at all. Simply because it is a name that, as far, as I know, is not highly associated with performance cars.

The Volkswagen GTI, Hyundai i30 N, Ford ST and the notorious German trio will likely be part and parcel of the dialogue.

The truth here is that a car does not need to have a bigger engine to qualify as a performance car – the soon to come A35/A45 S models that have been hit by the engine downsizing trend will attest to that.

The same scenario somehow applies to what I have recently had my hands on, the new Suzuki Swift Sport. It ditched the previous Swift Sport’s 1.6-litre N/A engine for a smaller unit. A punchy 1.4-litre engine now powers it and for the first time in a Swift Sport, it’s turbocharged – this is the same unit that I have bragged about in the Vitara Turbo that I sampled a few weekends ago.

Power has slightly been upped by 3 kW from the previous Swift Sport and now makes 103 kW and 230 Nm of torque.

Honestly, the Suzuki Swift Sport isn’t all about performance, it’s about fun. Its weight and tweaked suspension mean you can throw it into any tight curve and it will still remain tight and composed.

For the record, it boasts a 970 kg kerb weight and that has a huge advantage on how the Swift Sport goes about its respective duties.

The Swift Sport, in the six-speed manual guise that my test unit came fitted with really aroused the purist in me (there is a six-speed automatic transmission). It’s a car that fits perfectly fine as an everyday vehicle, it does not complain and it enjoys being driven as it should be, thanks to the engineering and what Suzuki calls rapid-shifting gearbox.

Point it towards the open road and it still shines with strong pulling power in all six gears. I took a drive down to Mpumalanga, Bushbuckridge to get to feel how the tyke performs on a longish drive.

It has one of the most accurate steering wheels, sturdy brakes as well as superior grip yet you feel even the slightest road crack because of the tweaked suspension – but not in a bad way, though.

Suzuki claims the Swift Sport can dash from a standstill to 100 km/h in 8.0 seconds. Well, it feels a bit quicker than that and I won’t be surprised if performance testers get numbers that dip below the 7 seconds mark.

Wait for the traffic light to turn green and just boot it and it dashes with little to no drama at the front wheels accompanied by a sweet cacophony churned out by the two breathers at the back.

I did not test the top speed but its creator claims it reaches its top speed at 205 km/h and I do not have grounds to dispute that. 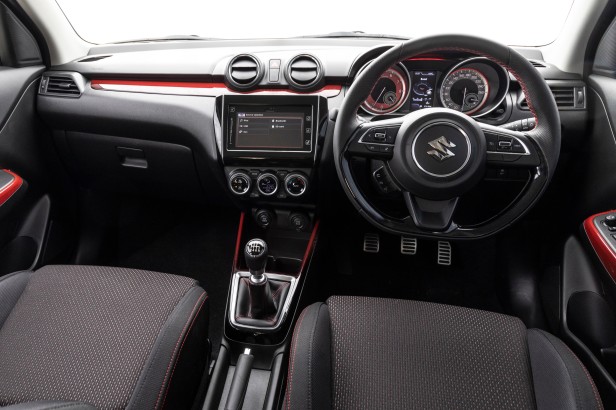 The Swift Sport, as fun to drive as it is, is one vehicle that is difficult to drive economically hence my fuel consumption numbers would hover around the 7.5l/100km mark simply because it’s more fun to drive hard. The numbers would drop below 5l/100km on the open road.

The only issue I found with the Swift Sport was the 37l fuel tank that requires constant refuelling during long drives.

Aesthetically, its looks are on point more especially in the Burning Red colour worn by my test vehicle. It’s unmistakably a Swift but with added bits such as a redesigned front end, two tailpipes, 16-inch alloy wheels, larger and reverse-slanted front grille with a honeycomb pattern and integrated fog lights.

It also gets new carbon fibre-patterned side under spoilers flow from the front splitter between the front and rear tyres. 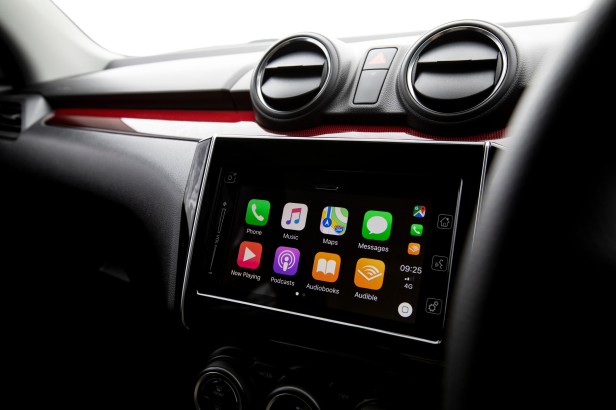 The Swift Sport’s interior is not one to complain about. There are racing bucket front seats that offer excellent support even around the tightest curve. The is a 7-inch infotainment system that comes with Apple CarPlay, Android Auto and Bluetooth compatibility – this is the same unit that is found in the Vitara and Ciaz models.

Suzuki made use of plastic material on the door panels, however, everything is well-put and does not rattle over road defects.

The new Swift Sport comes with six airbags, ESP and ABS braking with electronic brakeforce distribution and EBD. There are anchored ISOFIX mounting points for infant and child seats, side-impact protection and child locks on the rear doors.

For the record, the Swift in its standard form is a very important car for the Suzuki brand. If my grade 12 mathematics knowledge serves me well, 824 units of the Swifts found homes in SA in January. That puts the compact hatch slightly below the number of Polos Volkswagen sold in the same month.

With this information, it proves to me that the Japanese marque is headed in the right direction.

Yes, it might be a bit expensive at R317 900 (R337 900 for the auto) when you think you can get a used hot hatch, however, it is the fun factor that makes the Swift Sport stand out. It fits perfectly fine as an everyday car that will put a smile on your face, always.